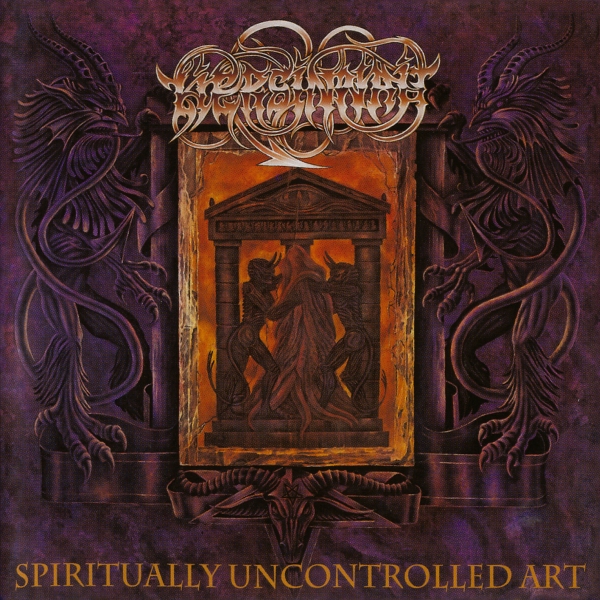 Back in the early 90s, most of Sweden's death metal bands had yet to truly break out, with the exception of Entombed and a handful of others getting decent signings (Grave, Dismember, Unleashed). Not sure we can classify Liers in Wait as a 'super' group due to the fact that its members' constituent bands were not yet massive at the time, but in retrospect, the enormous talent that went into this sole EP recording would classify it in that category.

The material actually carry a huge influence from faster USDM bands like Morbid Angel, Deicide and Malevolent Creation, spiced up with some frenetic, cosmic and philosophical atmosphere, lyrics rooted deeply in the Mythos of H.P. Lovecraft.

'Spiritually Controlled Art' is 17 minutes long only but a fine example of how bands were taking the pure death metal strains of both shores and twisting them into novel formulas. The mix of cosmic, cerebral horror and violent, proficient death metal might not seem so novel anymore, but Liers in Wait were one of the first to make it stick, albeit briefly. This effort is a good leap short of legendary, but its qualities yearn to be experienced by anyone seeking those dimly glowing gems of 90s potential.

- Vocals courtesy of Christofer Johnsson of Therion and Carbonized.

- Christofer Johnsson also covers some of the guitar here, joined by Kristian Wåhlin on guitars and keys, also the primary songwriter of this band. You'll know Wåhlin not only from his work in Grotesque or the later Gothic rock of Diabolique, but also his alias, Necrolord, famous Swedish cover artist responsible for legendary albums like Storm of the Light's Bane, In the Nightside Eclipse, Purgatory Afterglow, and so forth.

- Other musicians also participated: Hans Nilsson of Crystal Age, Dimension Zero and Luciferion (and at one point Tomas Lindberg of At the Gates was in the band, though not for this particular recording).

Side A
1. Overlord
2. Bleeding Shrines of Stone
3. Maleficent Dreamvoid
4. Liers in Wait
5. Gateways